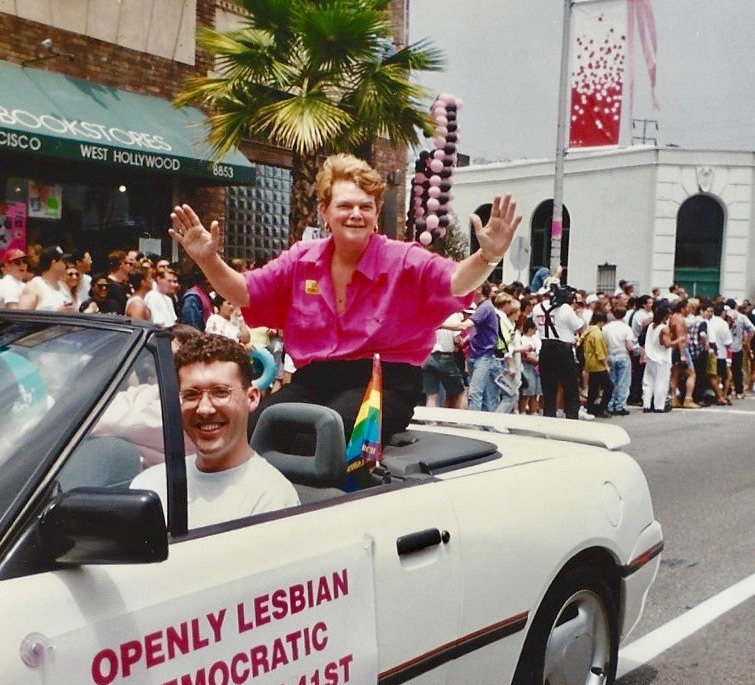 In 1994, Deborah Batts became the first out gay federal judge in history when she was sworn in to serve the Southern District of New York after being appointed by President Clinton. Before and during her service in the courts, she was the first African American faculty member at Fordham Law School.

During her 18 years as a federal judge, Batts presided over high-profile terrorism and corruption cases, and served as a mentor to many young lawyers. She presided over the Central Park Five litigation, which involved five men who were wrongly convicted in the 1989 beating and rape of a female jogger in Central Park. As the presiding judge, she rejected the city’s motion to dismiss, and the case led to a $41 million settlement.

Judge Batts passed away on February 3, 2020. She was honored in 2021 as a member of the founding class of the LGBTQ Victory Hall of Fame. 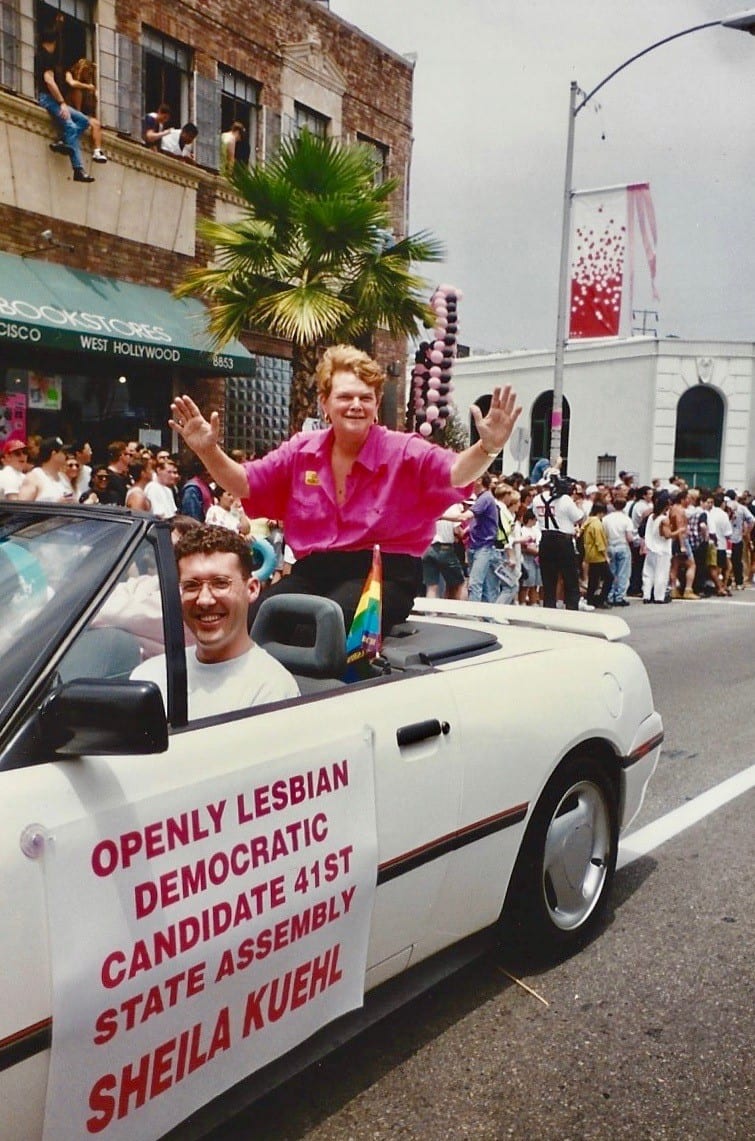 Perhaps the highest profile Victory Fund candidate in 1994 was Sheila James Kuehl, who portrayed smart teen Zelda Gilroy on The Many Loves of Dobie Gillis in the early 1960s. After graduating from Harvard Law School, she co-founded the California Women’s Law Center and wrote California’s first domestic violence laws.

Kuehl bore a responsibility other candidates did not shoulder: as the first LGBTQ person in the California legislature, she would be tasked with “representing” an emerging political minority starving for a seat at the table. Kuehl quickly learned, however, that the significance of being an out candidate had its upside, as she saw one night at dinner in Santa Monica when a “big burly guy” approached her restaurant table.

“I was a little bit freaked out and wondering how this was going to turn out,” Kuehl recalls, having received anonymous death threats during her campaign. “He said: ‘You’re Sheila Kuehl, right?’ And I said, ‘Yes, I am.’ And he said, ‘I just want to tell you—I hate all politicians. I can’t stand them. They dissemble, they lie, they never tell you the truth. I hate ’em all, except for you.’ And I said, ‘Well, thank you very much, but why me?’ And he said, ‘Well, you’ve already told us the worst thing about yourself. Why would you lie about anything else?’”

That voter saw coming out as courageous. “The notion of truth-telling where such a truth is very difficult, is sort of extra points for a politician,” Kuehl says.

Nineteen ninety-four also saw the Republican takeover of the California Assembly after 25 years of a Democratic majority. “I am going [to Sacramento] being Little Miss Gay Person all by myself, and not only was I worried about that—we also had a new, different kind of Republican majority,” she says. “These guys brought their Bibles to the floor. One of them consistently wore his Boy Scout uniform. One of them wore lederhosen. It was like a circus.”

“I think the grand virtue of the Victory Fund is it immediately gives you national access to donors, supporters, and people who had actually run for office and won who will encourage you,” Kuehl says. “It’s very important because you honestly don’t know who’s on your side when you first run.”

Several months after her election, the Los Angeles Times wrote a front-page story, the headline of which Kuehl jokingly amended to “Republicans like lesbian member, are surprised.”

Those words were lodged at GOP Congressman Steve Gunderson of Wisconsin on the House floor on March 4, 1994 by his colleague Rep. Robert Dornan of California, “outing” him to the world and making him the third out member of Congress after Gerry Studds and Barney Frank.

Dornan was referring to a Human Rights Campaign dinner where Gunderson – a strong supporter of gay rights before he was outed – mentioned sharing a beach house in Rehoboth Beach, Delaware, with “Rob” and “our two dogs.”

Coming out on his own terms in a Time Magazine profile in October 1994, he was reelected the next month, making him the first out LGBTQ Republican to win a federal election.

Gunderson briefly ran for reelection in 1996 with Victory Fund’s endorsement but dropped out of the race before November and was succeeded by Democrat Ron Kind. He spent his two years as an out member of Congress as a champion for the LGBTQ community, including fighting for AIDS funding and being the only Republican to vote against the “Defense of Marriage Act,” which barred federal recognition of same-sex couples.

After winning the Democratic primary with over 80 percent of the vote, Tim Van Zandt scored a landslide victory over his opponent in the 1994 general election for the Missouri House of Representatives. Through his election, Van Zandt made history as the first out LGBTQ person ever elected to the Missouri General Assembly. He was re-elected for three more terms before term limits prevented him from seeking re-election in 2002. In 1992, 1996, and 2000, Van Zandt was also a delegate to the Democratic National Conventions. 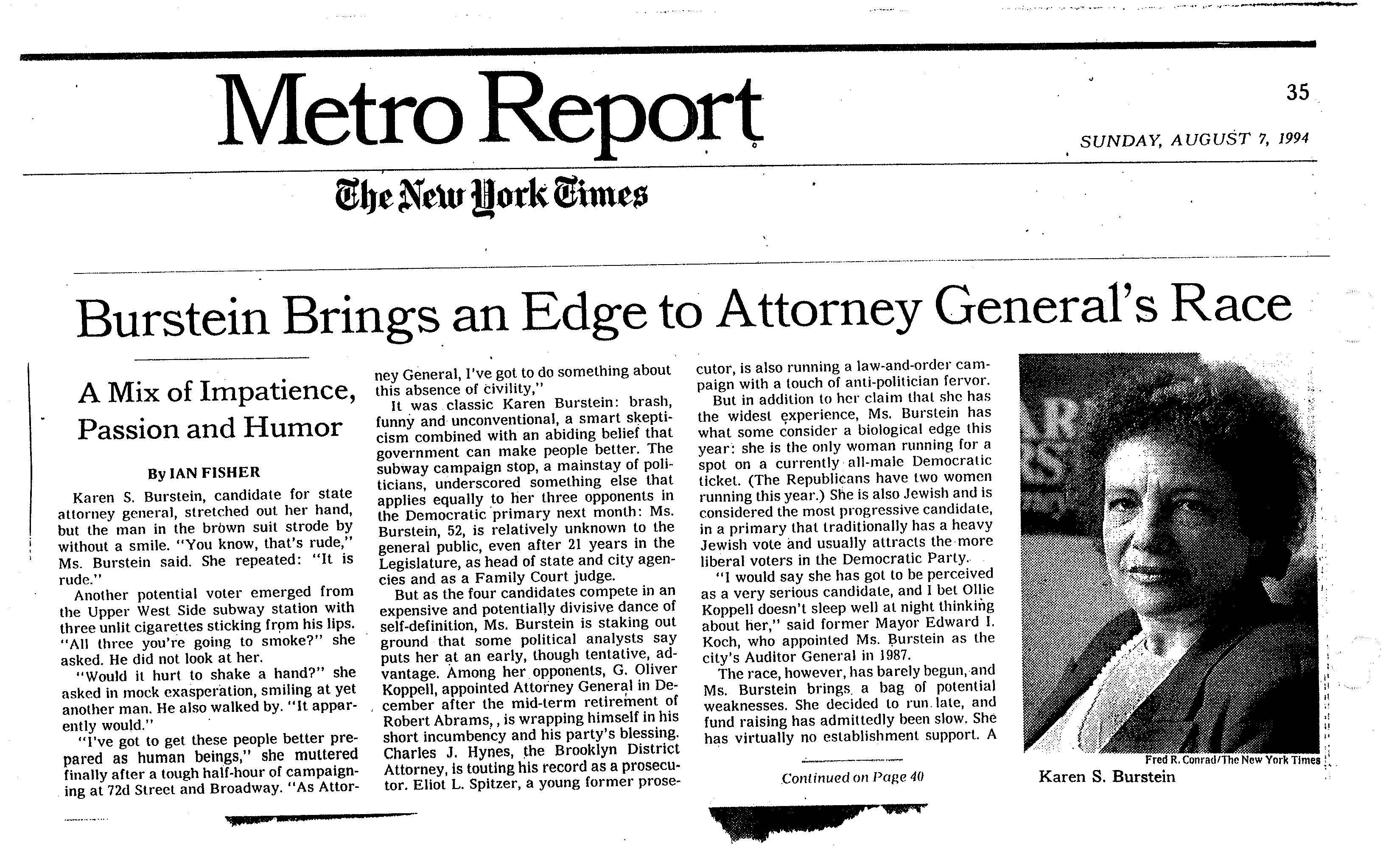 Karen Burstein's campaign was featured in the August, 7, 1994 issue of the New York Times.

After decades of public service for the state of New York, Karen Burstein made her landmark run for New York Attorney General in 1994, becoming the first ever out lesbian to run for the position. Burstein earned Victory Fund’s endorsement and the organization raised over $55,000 for her campaign. After Burstein won the Democratic primary, she withstood harsh anti-gay rhetoric from her opponents, ultimately ending in her narrow defeat in the general election. Burstein was a founding member of the International Association of LGBTQ+ Judges and was an activist for several causes throughout her life.