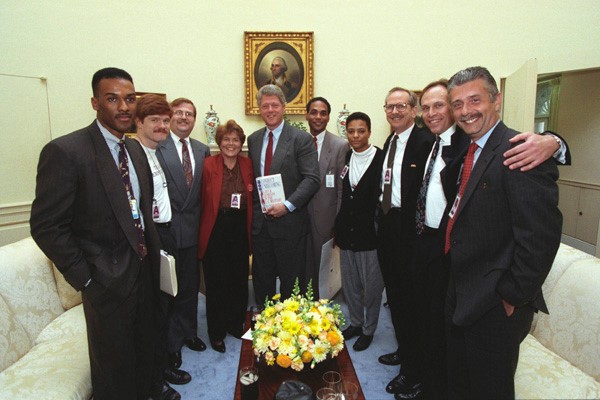 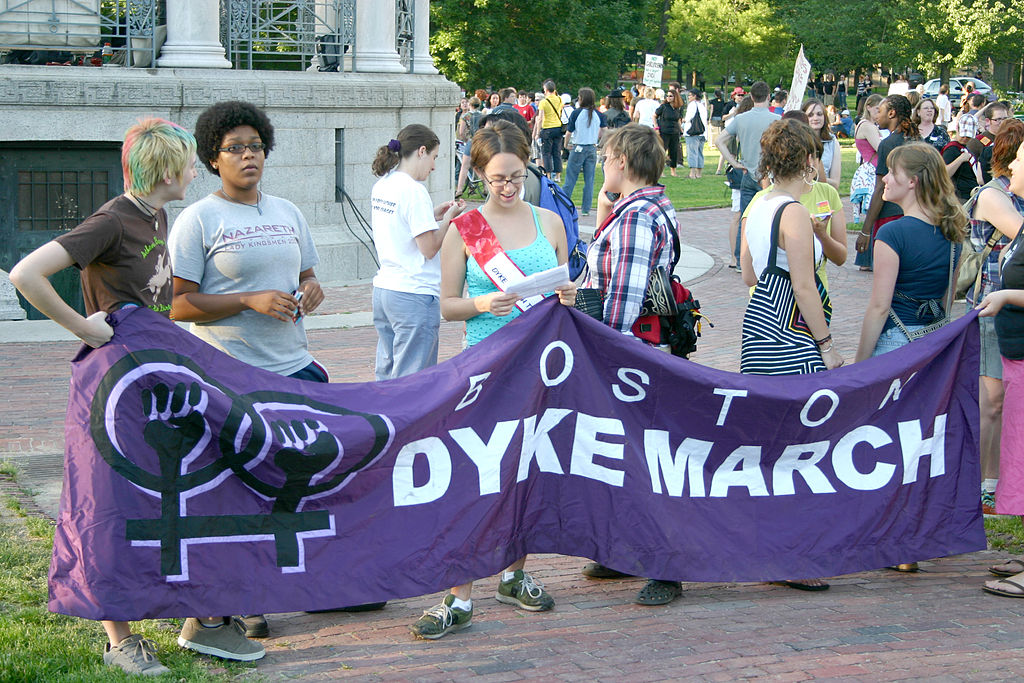 In 1993, the Lesbian Avengers organized the first Dyke March on Washington, D.C. as a million people organized in the city for the March on Washington for Lesbian, Gay and Bi Equal Rights and Liberation. Since then, lesbians in cities around the world have organized annual Dyke Marches, often coinciding with Pride and convening for purposes specific to each city, including visibility, highlighting women in the LGBTQ community, networking and protesting.

A trailblazing fixture in San Diego’s feminist and LGBTQ communities, Christine Kehoe was the editor of the Gayzette from 1984 to 1986, leaving to chair San Diego County’s arm of the statewide campaign to defeat Lyndon LaRouche’s AIDS quarantine initiative, Proposition 64. After that success, she worked for an AIDS assistance organization.

“Gay men were prevented from donating blood, so the lesbian community and straight women stepped up and started Blood Sisters to donate blood. All kinds of activities like that came out of the AIDS crisis,” Kehoe said in a March 17, 2016, video posted by the Women’s Museum of California about the “very desperate” times from 1985 to the 1990s.

In 1993, Kehoe ran for San Diego City Council. “My campaign motto was ‘As a North Park homeowner, I understand the importance of clean safe neighborhoods,’” she says. “The gay community realized this was our shot at truly having a seat at the table. If we won, I would be the first elected openly LGBT official in the county . . . It was still my favorite campaign. And we won by five points. And we amazed everybody. And we set out to really be a good representative for all the people. The gay community knew we couldn’t be silent anymore.”

Kehoe served seven years on the city council, during which she was appointed to the California Coastal Commission and the San Diego Association of Governments.

In 1998, Kehoe garnered national attention in her race for the U.S. Congress because of her sexual orientation, but did not beat her opponent. Yet in 2000, she was elected to the California State Assembly, where she served 12 years, during which she co-founded the LGBT Legislative Caucus, authored the state’s largest energy conservation bill, and was elected Assembly Speaker Pro Tem, the chamber’s second-highest-ranking position. In 2004, Kehoe was elected to the state Senate, where she served until termed out in 2012.

In March 2016, Christine Kehoe was inducted into the San Diego County Women’s Hall of Fame as a Trailblazer. She was the subject of the 2016 documentary Political Animals, which also featured fellow lesbian California political trailblazers Sheila Keuhl, Carole Migden and Jackie Goldberg.

In April 1993, LGBTQ leaders including Victory Fund executive director William Waybourn were invited to a historic meeting with President Clinton in the Oval Office just before the March on Washington for Lesbian, Gay, and Bi Equal Rights and Liberation. Yet three months later, in July, Waybourn was among twenty-eight arrested at the White House gate protesting Clinton’s “Don’t Ask, Don’t Tell”—a “compromise” policy replacing the promise of a complete lifting of the ban on open military service.

It wasn’t easy. Mixner had lost 300 friends to AIDS, including his beloved partner, Peter Scott, and he and Lynn Greer were working hard as board co-chairs for Victory Fund. William Waybourn “did a brilliant job in getting the organization off the ground on a daily basis,” Mixner says, a “huge challenge” since so many donors had died and others were financially stretched funding AIDS organizations.

“We just sat there aghast. How can we be at the apex of this epidemic and the Democrats won’t even touch us as a group?” Mixner told journalist Karen Ocamb in 2016.

ANGLE remained loyal while also making demands for their participation in a February fundraiser at the Beverly Wilshire hotel, hosted by future Secretary of State Warren Christopher. They wanted a private LGBTQ reception for out San Francisco Supervisor Roberta Achtenberg to introduce Clinton, hoping her raised visibility would lead to a presidential appointment.

“I would say a third, maybe even half the people at this straight dinner were gays and lesbians,” says Mixner. “That put us on the map—that was a turning point. We proved that we would be friends through thick and thin.”

But tensions remained. The historic “I have a vision and you’re a part of it” speech at the Hollywood Palace in May 1992 almost didn’t happen. When the campaign said “absolutely no press,” Mixner balked and said he was willing to return the $100,000 raised from the packed house. The campaign caved.

“We have all come a long way tonight,” Mixner said, introducing Clinton, the Los Angeles Times recalled in a historical recap on May 13, 2012. “No one handed us this event tonight . . . we earned it, inch by inch, step by step, moment by moment.”

In Historic First, Roberta Achtenberg Confirmed by the Senate 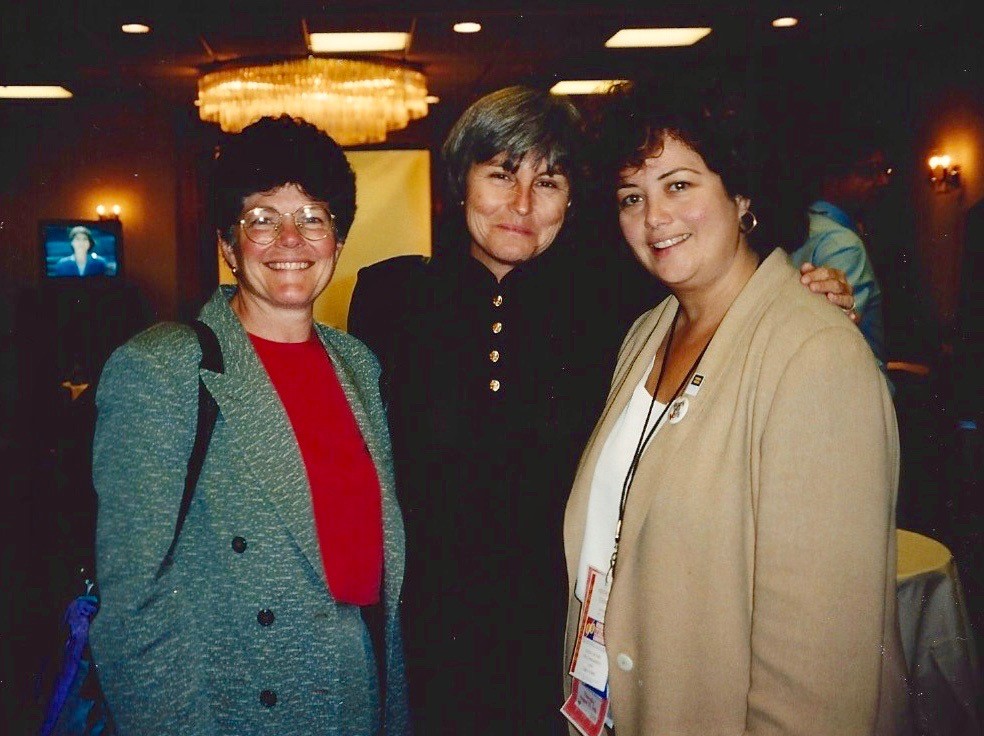 In 1992, out San Francisco Supervisor Roberta Achtenberg addressed the Democratic National Convention on the most pro-LGBTQ civil rights platform in U.S. history. Longtime Bill Clinton campaign staffer Bob Hattoy also delivered a powerful speech on being a gay man with AIDS. Both were breakthroughs.

The LGBTQ vote was not clinched, however. “We waited with baited breath to see if any reference to ‘gay’ was included” in Clinton’s acceptance speech, says Achtenberg. If not, David Mixner was prepared to lead the 133 gay and lesbian delegates off the convention floor in protest. “We needed to be vindicated, and indeed, we were.”

After Clinton’s victory, Victory Fund’s William Waybourn spearheaded the Presidential Appointments Project. At the top of the agenda was ensuring the nomination and confirmation of Achtenberg to be Assistant Secretary of the Department of Housing and Urban Development.

“My appointment was designed to be the vanguard,” Achtenberg told journalist Karen Ocamb in her 2016 book Representation Matters, though no one imagined the degree of ugly resistance. “That took everybody by surprise, including [Sen.] Ted Kennedy, who at one point called me up at night and apologized on behalf of his colleagues.”

The headline-making resistance was led by venomously anti-gay North Carolina Republican Senators Jesse Helms and Lauch Faircloth. Helms, who tried to be a “brooding presence” during the committee hearing, called Achtenberg “that damned lesbian,” which lesbians soon appropriated and turned into a tee shirt.

Founding Victory Fund board member Hilary Rosen got busy lobbying senators. “Hilary is really the person who engineered the positive confirm,” said Achtenberg. “She knew where all the bodies were buried, and she went up to the line to make it happen.”

Achtenberg’s confirmation became a mobilizing moment for the LGBTQ movement. “Everybody knew I could not go down,” she says. “It felt like we had to do whatever it took to win.” Vice President Al Gore was on standby in case he was needed to break a tie on the floor, but on May 24, 1993, Achtenberg won 51 to 34, with a number of “chickens” not voting.

Achtenberg looks back with pride. “It hurt deeply to be called all kinds of names. Helms questioned the legitimacy of my relationship with my family. He said I was unfit. They questioned whether I could uphold the Constitution, as if being gay meant you were not a patriot. But we prevailed, and it’s thanks to people like David and Hilary and the Victory Fund who stuck their necks out. It’s easier now, and we’re glad of it.” 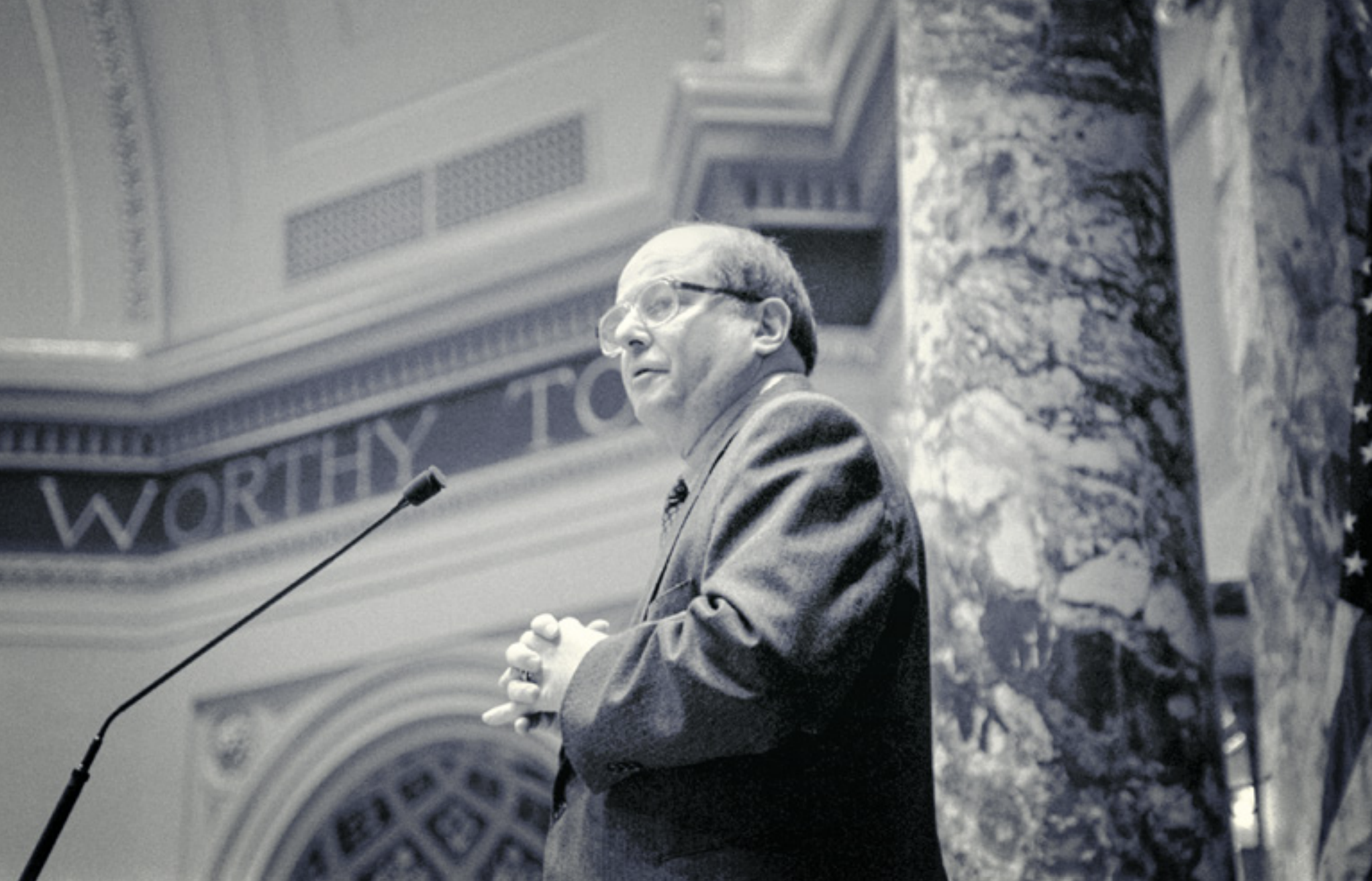 There was a period of time -- just before and after the Stonewall Riots in 1969 -- when activists were rising up against the Vietnam War and transforming civil rights into new liberation movements where gays and lesbians were considered a legitimate minority instead of pathological perverts. Some of those activists, like Yale University PhD graduate Allan Spear, chose to make change legislatively. Spear was elected to the Minnesota State Senate in 1972, coming out in 1974, just a month after Elaine Noble became the first out LGBTQ person elected to a state legislature. He served twenty-eight years in the Senate, including eight years as president until his retirement in 2000. The highlight of his career was working without House Rep. Karen Clark on passage of the 1993 Minnesota Human Rights Act, giving gay residents protection from discrimination in education, employment, and housing. The bill had been on the table for twenty years.

“I know a lot of people who have served with me—either colleagues or staff people, lobbyists in some cases, who have told me that they have changed their views on gay issues over the years because I was the only gay person they ever knew,” Spear told “Out and Elected in the USA: 1974–2004” for OutHistory.org

He was seen as a “productive human being” and “they developed new ideas and new attitudes about what gay people are and how gay people behave because of that.”

Coming out has an impact. “I’ve always argued that coming out is the most important political decision that any gay person can ever make. We think of it often as personal rather than a political decision, but it also has this really profound political impact on the people around us and in our own society,” said Spear, who passed away on October 11, National Coming Out Day, 2008. He was survived by his partner of 20-plus years, Junjiro Tsuji. 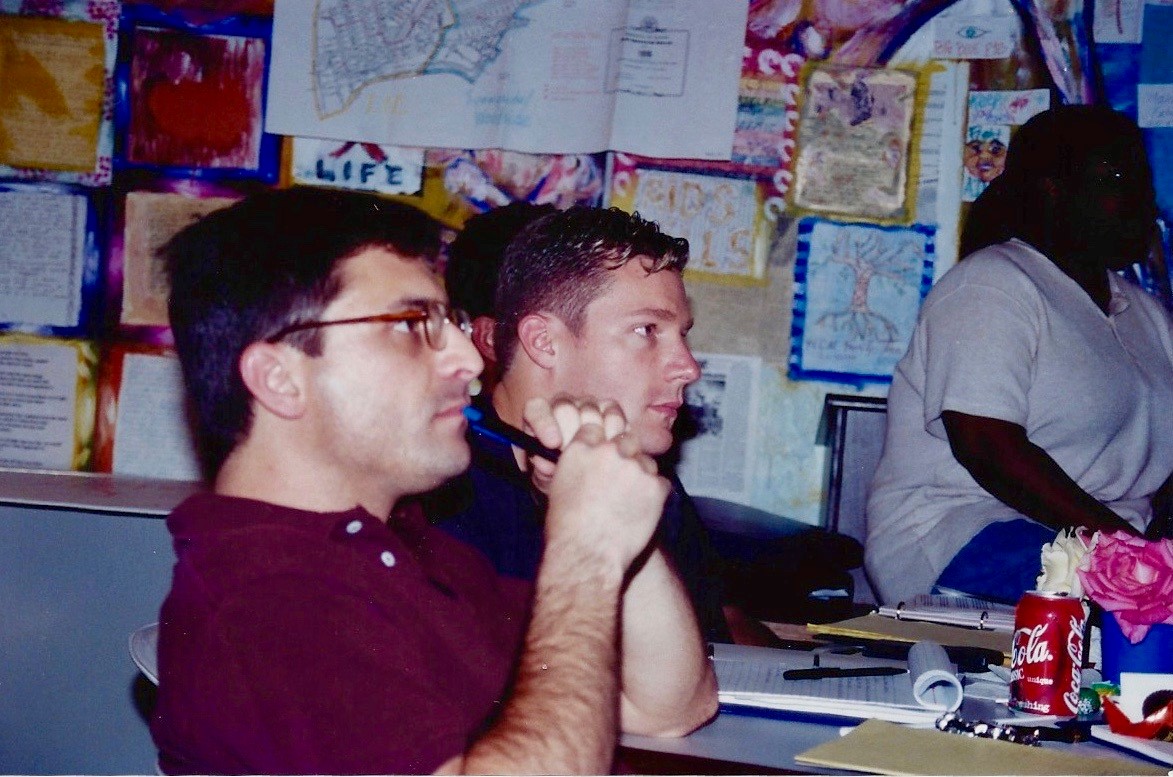 With the mission of Victory Fund focused on electing LGBTQ candidates, a second nonprofit organization, Victory Foundation, was created in 1993. Executive Director William Waybourn hired Dave Fleisher to take on the important work of recruiting, training, and developing LGBTQ future candidates and leaders. The premise was straightforward: more well-trained LGBTQ leaders could run for office and win. This increased representation at all levels of government would then influence legislation, policies, and other decision-making in favor of LGBTQ equality.

While the Candidate & Campaign Trainings for LGBTQ leaders remained its signature program, the organization also housed the Presidential Appointments Initiative (known then as the Presidential Appointments Project), which aimed to place presidential appointees throughout the federal executive branch and federal agencies. It began work informally with President Bill Clinton’s administration and grew in strength throughout the years—receiving more than 3,000 applications from LGBTQ leaders during the administration of President Barack Obama.